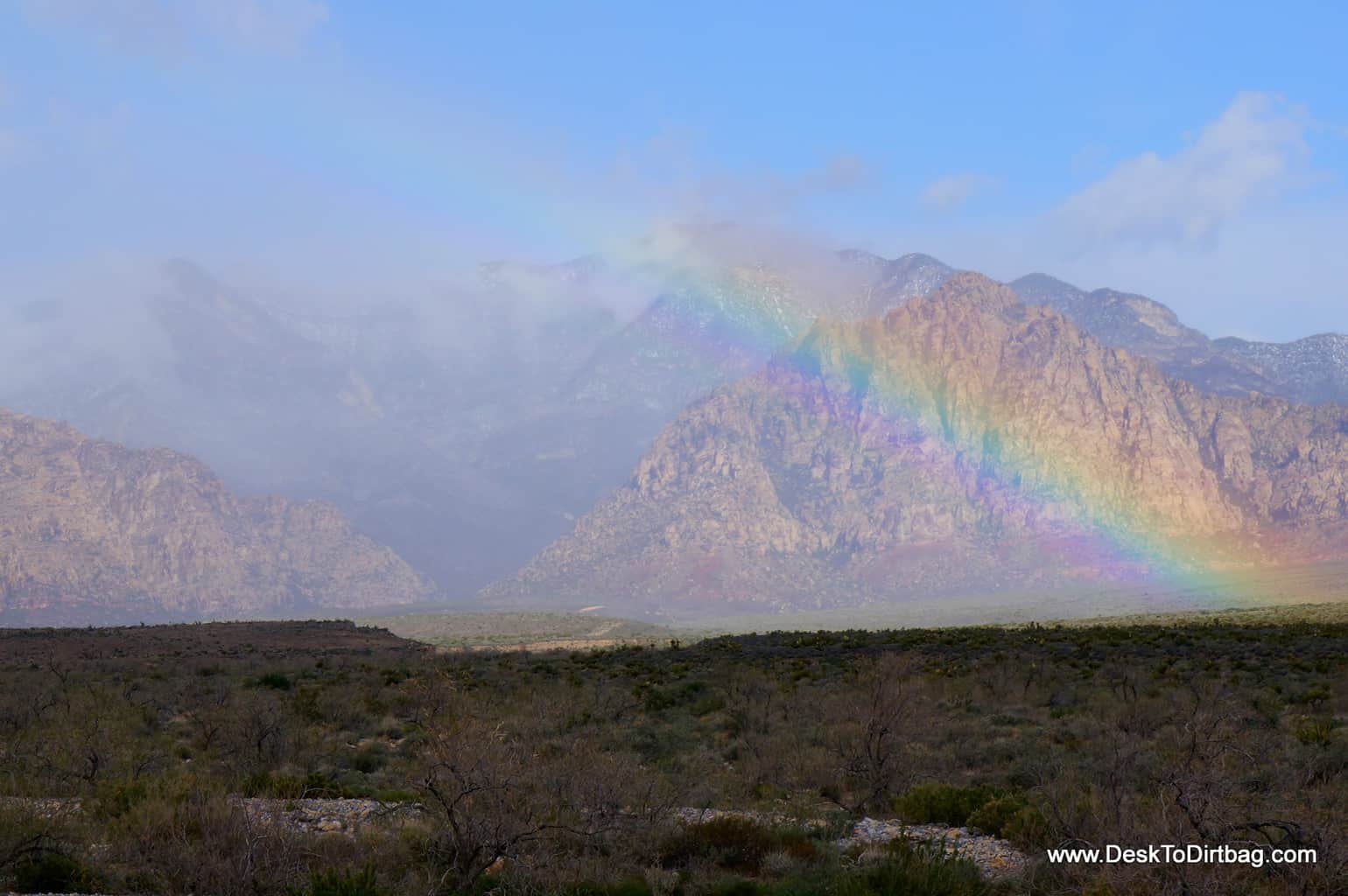 The hustle and bustle of the Las Vegas Strip is at the top of many traveler’s lists, and while it can be captivating for awhile, there are far more incredible things to explore beyond the sprawl of Las Vegas. If you love nature and wild spaces, then you owe it to yourself to check out Red Rock Canyon, located just 15 miles west of Las Vegas and easily seen from the Las Vegas Strip.

The Red Rock Canyon is Federal land, managed by the Bureau of Land Management (BLM), and protected as a National Conservation Area. The highlight of the conservation is a large set of sandstone peaks and walls known as the Keystone Thrust.

This sandstone rock is striated in all shades of red — thus the name — and is truly a captivating area to explore if you enjoy hiking, rock climbing, or just the simple beauty of mother nature.

I spent quite a few weeks in and around the Las Vegas area while I was living in my truck and following my attendance at the Red Rock Rendezvous, an annual climbing festival that takes place there (also definitely worthwhile), so I’ve gotten pretty familiar with the area and what it has to offer.

But for the first time visitor, here’s what you should be sure to do while in Red Rock Canyon.

The simplest and most accessible way to take in the beauty of Red Rock Canyon, even if you’ve only got a few hours on your Las Vegas Vacation, is to hop in a rental car and head west.

Within the Red Rock Canyon National Conservation Area, you will encounter a one-way loop road that is 13 miles long. This road provides access to many of the most popular features and attractions, but it’s also great to just drive the loop and take photos.

The loop is also popular among bicyclists.

Mount Wilson is the highest sandstone peak in the Spring Mountains, and it is a striking peak which you can enjoy from afar.

But if you want to get a whole other perspective on Vegas and the surrounding area, you can scramble up to the top of Mount Wilson along a number of less technical routes that range from Class 3 to Class 4, or a few technically challenging rock climbing routes.

Ice Box Canyon is the perfect place to explore on those hot Vegas days. The canyon gets its name because the deep canyon receives almost no sunlight, so the area stays refreshing and cool despite the blazing heat outside, particularly with the nice breeze rolling through.

You will need to hike about an hour across open desert in order to reach the cool area, so be sure to plan accordingly and still bring plenty of water, sunscreen, and protection from the sun.

The Calico Hills may be one of the most singularly spectacular places in all of the Red Rock Canyon National Conservation Area.

They are a series of rolling sandstone hills, splashed with all sorts of colors. They were once ancient dunes that were compressed and turned into solid stone.

Speaking of geology, don’t skip out on a visit to the Red Rock Canyon Visitor Center as you enter. It will teach you about not only the geography of the area, but also the history, nature, wildlife, and plant life that call the area home.

It will give you a deeper understanding and appreciation for everything you are about to see.

Not only can you see the famous Joshua Trees, but it’s a place where you can spot wild burros (donkeys), coyotes, tortoises (be careful while driving!), bighorn sheep, and much more.

The desert is a spectacular and beautiful place. Sometimes the best thing to do is nothing at all, just sit out and quietly enjoy the landscape, hopefully spot some animals, and watch as the light changes and new colors emerge in an already colorful place.

Unfortunatley, there are no campgrounds within Red Rock Canyon, but there is one small campground just outside of the conservation area. Sites are relatively open and exposed, with the exception of a shaded awning.

I much preferred to wild camp elsewhere, either along the south side of the conservation area off of Route 160, or a bit further off along the shores of Lake Mead.

Red Rocks itself is a pretty amazing place that you can get a taste of in a day, but you could spend a lifetime exploring. Even though I spent a few weeks there, I felt like I only scratched the surface, but that’s what made me come back again a few years later.

But Vegas definitely didn’t strike me too well. It was probably my least favorite stop in my travels last year.

There were two experiences that left a real bad taste in my mouth.

1) I lost one of the locks for my Leer 122 Canopy–it fell off at some point, so one side of my door was loose and I had all my valuables in the back. I wanted to get it fixed fast. There were two authorized Leer Dealerships in the area. I went to one and they didn’t have the part but said they could order it for $5 but it would take a few weeks.

I went to the other place Camp-Out Inc and they had the piece in stock. Everyone in Vegas is trying to swindle or hustle you it seems. The guy there told me “Oh yeah, we got it. Normally it costs $12 but if you let me put my logo on the back, I’ll give it to you for $5”. Already knowing that it cost $5, not wanting to barter, just wanting it fixed, and thinking he was going to put a sticker on the back I told him, “Yeah, sure, whatever.”

We go in to pay and then come out and his guys are DRILLING HOLES into the door of my brand new $1,000+ canopy to install a little sign that said “Camp-Out Inc” and scraping the LEER decal off the back window.

I was shocked. And not very happy at all. I would fully recommend steering far, far away from this shady business. At least I like camping, though I definitely do not like Camp-Out Inc.

2) I also got a nearly $200 ticket for jay-walking downtown… That blew me away! I’d been living in the East Coast in DC for five years… I jaywalked every single day in front of police on my way to and from work… Every. Day. Never had a problem.

And then some cop pulls up and treats me like a wanted fugitive for walking across a street without traffic. And now I’m that much poorer. Everyone is trying to hustle you in Vegas.

Spend some time at Lake Mead as well. The other cool place I went to in Vegas was Phat Phrank’s Mexican Restaurant. That guy is awesome and makes some of the most delicious Mexican food I’ve ever had.