I just got a back from a six-day Alpine Ice course with the American Alpine Institute (AAI) out of Bellingham, WA. The trip was intended as a warm up run for my Mount Rainier climb next month, and going into it I didn’t really have high expectations for our weather chances in early June. I’m glad my expectations for the weather were realistic, because ultimately conditions were only nice on the first and last day–basically for our hike in and our hike out. Otherwise, throughout the week we had roving whiteouts and a few snow flurries / light rain showers. We couldn’t see the summit for at least three days and then when it finally opened up on the night before our summit attempt, it had a lenticular on it. In the end we just opted not to even go for a high camp or put in a summit attempt and just stayed at Harrison Camp and climbed the ice along the lower Coleman Glacier. We basically had the mountain to ourselves during the week, there was one other AAI group at the Hogsback that went up the same day as us, and we could see them camped up a little higher at the Hogsback Camp. But they were only around for a couple days. After that, we only saw two other groups at the end of the week, both of whom tried to summit but turned back because the snow was worse than mashed potatoes, I guess. Even if we had opted for a summit attempt, we also had concerns about avalanche conditions, regardless of weather.

Sunday morning I met up with our guide, Mary Harlan, a rock superstar out of Colorado who had just returned from Denali, as well as the other client, Garrett, who had just flown in from China where he works. It would be just the three of us for the week. We did a quick gear check and and grabbed a few rental items before making our way to the north side of the mountain.

Day one was just the hike to Harrison, an almost all day affair because of the high snowfall. We started about a mile and a half back from the trailhead because the road wasn’t passable. We ended up hiking up the creek drainage before traversing up through the trees to try to reach camp. Upon reaching Harrison Camp, we found that we had the place to ourselves. A few tent platforms remained which we dug out a little more and then set up camp. Garrett had a brand new Hilleberg tent, out for it’s first use, which we were sharing. But unfortunately not long after we had set it up, we discovered a large 6″ or so hole scratched into the floor, and a partially eaten bag of bagels. Best we can figure is a mouse ran into the tent when the door was briefly left open, he helped himself to the bagels, and then to get out he just borrowed straight down through the tent floor. Garrett taped it up with duct tape and remained ever vigilant throughout the trip. Great way to start the trip, but certainly a lesson learned, don’t EVER leave the tent door open while unattended, even briefly, and don’t leave any food in your tent.

Day Two we went out to adjacent snowfield just beyond the tree line in order to do snow school review, snow anchors, self arrest, and the like. Day Three we did crevasse rescue in the morning, and then an intro to footwork on ice, and the basics of ice tool use before practicing climbing some short routes on top rope.

Garrett was kind enough to let me use his Black Diamond Cobras to climb with throughout the course. Day four we rappelled down into some crevasses in the lower Coleman Glacier and climbed out some pretty long vertical routes. It was truly amazing to go so deep into the glacier and see the deep blue ice in the wet, dripping caverns. I also took the opportunity to prussik out of one of the crevasses, just because I had yet to do that. It is quite strenuous! On the way back to Harrison Camp we also did a mock multipitch on the snow slope in order to practice transitions, belay stations, etc on multipitch ice. There obviously isn’t much significantly different than multipitch rock. Day five we headed back to the lower ice fall and did a mock multipitch on some moderately graded ice (not vertical) and did some traversing. 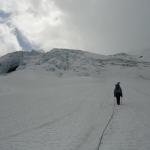 Toward the end of the day the weather actually appeared to be breaking which caused us to hem and haw a bit over whether or not we should head out early and either move camp up higher and/or go for a summit attempt (even via the standard Coleman route). We decided to head back to camp and then make one last check on the mountain. In the end we decided that it wasn’t worth it to travel up for an unlikely summit, so we stayed put at Harrison Camp. And finally on Day Six, since I was lamenting the fact that we had not ventured higher than Virginia’s highest point (Mount Roger’s at 5,729 feet), we decided to hike up a little higher towards the Heliotrope Ridge on the way out, and made it to at least 6,000 feet above sea level. Afterward we all went out to Boundary Bay Brewery back in town to grab some dinner, and we  also met up with Kevin Hogan, who was my guide on last year’s Alpinism I program. He’s a great guy and a lot of fun to be around, so it was good to see him again. After we parted ways with Garrett, I gave Mary a ride down to Seattle before her flight out to Colorado.

As always, a bad day in the mountains is better than a good day in the office, but of course (even despite my weather expectations) I was still somewhat disappointed not to have made a summit attempt and to have stayed so low on such a big mountain. It was most definitely a good skills refresher though and about half of the curriculum was new material. It was also just awesome to get out on the ice for my first time! It’s a blast to climb and as you can imagine, quite different from rock climbing!

AAI does offer 25% off to repeat certain climbs as part of their “Second Summits” program. It is only eligable on guided group climbs of Mount Baker, so I’m not sure that I’ll ever use it, unless I sometime take their Denali Prep course up there.