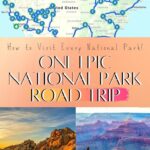 Have you ever dreamed about leaving everything behind and setting out on the ultimate National Park road trip across the entire United States? I know I have! While I’ve set off on a number of epic road trips, including a massive west coast National Park road trip (twice, actually), and another cross-country road trip, and yet I’ve only managed to visit a total of 32 of the 63 National Parks. That means I’ve still got a lot of ground to cover, especially those parks that lay east of the Rockies.

And don’t miss my top national park road trip planning resources at the bottom of this article!

In this article, we are going to be talking about how to link together the vast majority of those parks, including basically all of them within the Lower 48 (aka the Contiguous USA) as well as an option for including the newest national parks that were added to the system in the past couple years. Combining together a bunch of national parks is the very definition of a great American road trip, in my eyes.

Ready? Let’s get planning and hit the road!

Within the continental United States (aka Lower 48) there are a total of 51 National Parks — there are 2 in Hawaii, 8 in Alaska, and 2 in the territories, making a total of 63.

But of those 51 National Parks in the Continental USA, there are another four parks that are not accessible by vehicle due to the fact that they are maritime-based National Parks.

While driving the Pan American Highway, I started dreaming about once again returning to those incredible protected areas back in my homeland. So I started to imagine what a massive national park road trip in the USA would look like.

I jumped on Google Maps and connected the route in the most logical way I could, taking into account the many miles and many parks I have already visited as well.

This Epic National Park Road Trip covers terrain in at least 39 of the 50 states, across more than 16,950 miles (27,277 km), and visits 45 of the 51 National Parks located in the Continental USA, but does not specifically include the four island-based National Parks (although you get pretty close and could organize boat transport to reach them), nor the two Midwest national parks.

Honestly, I’m not really sure why Gateway Arch is a National Park when it is more of a historical monument. That’s one park I would probably skip if your focus is on nature. Indiana Dunes, on the other hand, would be easy to include and is a nature area. White Sands National Park, on the other hand, is included on the main route and is definitely not to be missed! And at the end of 2020, the New River Gorge in West Virginia was designated as a National Park.

I’ve also deliberately tried to route the map to visit a number of incredible scenic areas that aren’t necessarily national parks, like Monument Valley or Grand-Staircase Escalante, for instance.

I also made the route go through a number of exciting cities or landmarks, like the Golden Gate Bridge, Las Vegas, or even places like New York City, since an epic American Road Trip would seem almost incomplete without at least passing through some of these places. Furthermore, in areas where there aren’t national parks, I tried to route the trip through areas of interest, like the Mississippi Delta for a Blues and Americana trip in order to connect parks or regions.

Be sure to zoom in and explore the interactive road trip map above, you will find additional notes and details about the trip planning process to better help guide your decision-making process. The map also includes park hiking trails and campgrounds to help you plan!

At a minimum, you wouldn’t want to take less than three months, in my opinion, to do a trip of this magnitude, as you shouldn’t have to rush through something like this.

For this hypothetical, albeit still rushed timeline, I would consider starting this national park road trip in the Northeast (since that’s where the largest population centers are clustered) and visiting Acadia National Park in Maine as the first stop in mid-July.

This allows you to cover the northern half of the US National Parks during summer in places like Glacier National Park, Mount Rainier, etc.

Then you will head south into the national parks of California by the end of August, and spend the beginning of fall exploring the multitude of parks in the American Southwest before heading once again across the country to reach the chain of east coast national parks (hopefully) in time for the changing of the leaves and fall colors.

This is a rushed and not ideal trip, of course. I would consider more time to be crucial!

I will teach you the top methods I’ve used to save big money 💰💰💰 during more than a decade of continuous travel in my best-selling book Big Travel, Small Budget. See for yourself, the book has nearly 200 unbiased opinions and 4.4 out of 5 stars on Amazon! ⭐⭐⭐⭐⭐

An ideal road trip of this length and geographic range would last at least six months to a year… Considering the weather, it might be best to start in the American Southwest in late winter or early spring, then head clockwise, through the Pacific Northwest and northern half of the country in summer, down the East Coast (fall colors!) in Autumn, and across the southern half in the winter.

But anyone who was the chance to undertake this journey will have a different starting point, starting time of year, and length of time to complete it. You will need to customize it as you see fit and most likely have to make compromises along the way (visiting out of season, for instance). Either way, you’ll be able to hit the highlights of the park system as well as the most underrated national parks that don’t get as much attention.

Here is the order of National Parks visited on this road trip itinerary. Those with an asterisk (*) are the island parks that aren’t accessible by car. Those with a tilde (~) are the two Midwest parks which could be included with a detour of the current route. I also included a checkmark (✓) next to those national parks that I’ve visited personally.

Looking for more road trip inspiration? Don’t miss my post about the most scenic drives in the USA, the best road trip books, or all of these amazing places to visit on a West Coast road trip.

If you need more concrete stuff beyond inspiration, you may want to check out my 21 favorite apps for a road trip, or my favorite podcasts to listen to while on the road.

I hope this post has filled you up with National Park road trip ideas, I know it has for me! I’m itching to get back on the road as I write this.

Read Next: The Ultimate Guide to Road Trip Planning