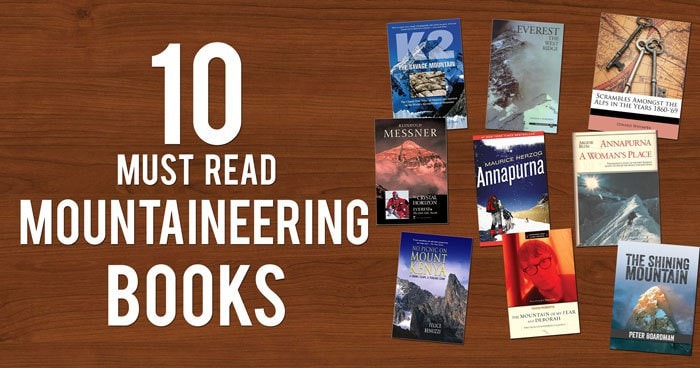 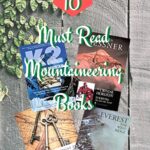 I asked Andrew Szalay to put together an article on the best mountaineering books because I could think of no one better suited to write about the subject than Andrew.

Andrew Szalay is a DC-denizen like I used to be. While he calls the flatlands home he still thinks often of the big ranges around the world. Andrew writes extremely eloquently and thoughtfully about the current state of Alpinism and the world of mountaineering books and literature and writing on his blog The Suburban Mountaineer. I highly recommend checking it out!

In 1965, David Roberts returned home with two climbing partners after completing the hardest new route in Alaska to date. These college-age alpinists were all students at Harvard University and members of the Harvard Mountaineering Club. It was a successful climb, however, when they left for Alaska there were four of them.

At home, Roberts was in turmoil. He didn’t know what happened. There was literally a spark in the dark, and oddly there were no shouts, only silence, but he knew his rope-mate, Ed Bernd, was gone. It was sudden, final, and deeply impactful.

While grieving and dealing with the emotional stress after coming home, Roberts went upstairs in his father’s home and sat at the typewriter to hammer out The Mountain of My Fear. He wrote it in a day and sent it to a publisher unedited and without revision. It was raw, passionate, and authentic. That’s why it’s on this list of great climbing books.

The genre of mountaineering literature has literally hundreds of titles and several hundred more that are out of print. With that many titles, you can easily make a top 100 list of mountain climbing books. But sorting through a long list like that for the true gems can also be difficult.

So here are 10 that were written with authenticity and passion like Roberts’ first book and possibly his finest work, or are at least significant enough to stand the test of time.

If you’re a climber or an armchair mountaineer, you owe it to yourself to read and be familiar with these amazing mountaineering books:

10. K2: The Savage Mountain by Charles Houston and Robert Bates

Most notably, this is the climb where Pete Schoening pulled off the most memorable feat in all of mountaineering — a miracle that saved the tragic expedition from being completely wiped out along with Houston’s significant tale.

He and Willi Unsoeld chose the committing route of the West Ridge and to complete the route by the first traverse of the peak.

Hornbein tells the story, which included a dramatic bivouac just below the summit, with energy and the confidence of a bold explorer.

8. Scrambles Amongst the Alps in the Years 1860-69 by Edward Whymper

This is the oldest book to make this brief list of climbing books; it was written in 1870 by the legendary Edward Whymper.

It tells the earliest adventures in the Alps while providing practical instruction (like how to tie into a rope for glacier travel).

At that time, mountainous regions were no longer considered wastelands or “boils”; they began to be romanticized and became the site for new “sporting” activities. Most notably, Whymper covers his multiple attempts to climb the iconic Matterhorn. Despite the book’s age, it remains very readable.

Climbing Annapurna is more dangerous than K2, based on the ratio of climbers to climbers’ fatalities per mountain.

To make a point about the power of women, Arlene Blum organized an all-women’s team to climb Annapurna.

To raise money for her quest, she even sold tee-shirts that said, “A woman’s place is on top.”

She was provocative, controversial, and inspiring. While there has been controversy about how the ascent was actually executed, the value and pioneering spirit transcend any allegations, which is why it lands on the list of top 10 mountain climbing books.

6. The Crystal Horizon by Reinhold Messner

Reinhold Messner repeatedly broke boundaries, but this soliloquy of his second journey to the surface’s highest point, and his first alone, brings the reader close to feeling like an alpinist by merely turning the page.

His writing has been called “dry” by some, but that’s actually because he restrains his enormous ego to share his moment-to-moment thoughts during his climb and the events that passed during his ascent to stand on their own collective merits.

5. The Mountain of My Fear by David Roberts

David Robert’s book is listed as the third climbing book on National Geographic’s extensive ranking of the Top 100 Greatest Adventure Books of All Time, after Herzog’s Annapurna and Krakauer’s Into Thin Air, respectively.

Roberts retells his story, with unparalleled insight, of putting up the most progressive climb in Alaska to date, the Harvard Route on Mount Huntington.

4. No Picnic on Mount Kenya by Felice Benuzzi

Locked up in a prisoner of war camp in Africa during World War II, soldier and mountaineer Felice Benuzzi could see Mount Kenya from his jail.

He knew escaping from the prison to political freedom was futile because the surrounding desert was so vast. On the other hand, breaking out just for the opportunity to attempt the technical Mount Kenya was something that would break up his boredom and redeem his time.

That was, of course, if he could escape, navigate his way, and survive the ascent.

3. The Shining Mountain by Peter Boardman

I shared a preliminary list with some experts and Dougald McDonald, the editor-in-chief at Climbing magazine and the Executive Editor at the American Alpine Club, pointed out that I left this off my list.

(I immediately slapped my forehead, to say, “Of course!”)

Written by Peter Boardman, a member of the dynamic duo of the Boardman Tasker Prize of the Boardman-Tasker Mountain Literature Award, the book takes the reader on an alpinist’s quest, and the journey is committing.

This retelling of the first ascent of an 8,000-meter peak, by Maurice Herzog, is actually the number one climbing book on National Geographic’s extensive ranking of adventure books.

While disputes about the book’s accuracy have recently arisen, the significance of the ascent and the dramatic storytelling of the pioneering climb renders the criticisms as minor, especially compared to the influence this book has had in inspiring future generations of climbers around the world.

1. The Mountains of My Life by Walter Bonatti

This is the autobiography of Walter Bonatti.

He is arguably one of the greatest mountaineers of all time based on his originality, pioneering accomplishments, and tenure.

The book meets up to the standard of the man and that’s why it’s number one on this list of the best mountain climbing books.

What are your favorite climbing and mountaineering books? Be sure to let us know in the comments section below!

Andrew Szalay is a Washingtonian (the D.C. kind) that believes climbing matters — especially when you live in a metropolitan area. He writes a blog, called The Suburban Mountaineer, about mankind’s accomplishments in the mountains and climbing culture, and he aspires to be an expert on mountaineering books and literature. You can also follow him on Facebook and Twitter.

Be sure to also check out my list of the top road trip books, or the most inspirational travel reads if you’re looking for more awesome content to devour.

Read Next: The Best Climbing Movies of All-Time

I will teach you the top methods I’ve used to save big money 💰💰💰 during more than a decade of continuous travel in my best-selling book Big Travel, Small Budget. See for yourself, the book has nearly 200 unbiased opinions and 4.4 out of 5 stars on Amazon! ⭐⭐⭐⭐⭐