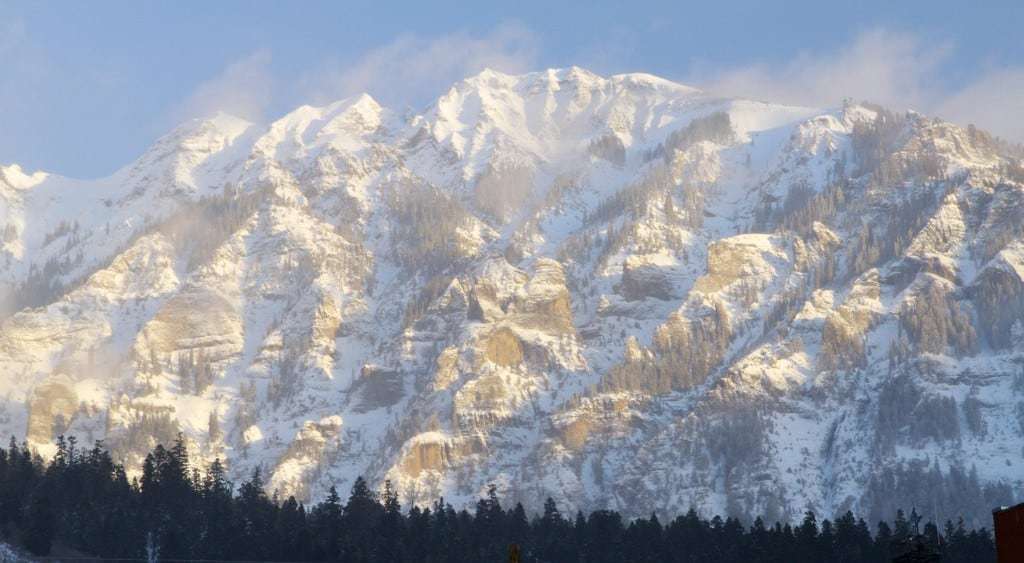 This 30+ degree F climbing and easy accessibility of the Ice Park had been making me soft! Well, at least I could finally use some more of my toe warmers (I’ve got two boxes of the things, after all).

I met up with Colin again, late on Monday morning, for his last day in the Ouray area. We started the morning by exploring some of the steeper routes in the Five Fingers area of of the park, located just downstream of the Lower Bridge.

The anchors in this area are all rigged with long, single chains that stretch across the road–you can then attach a cordelette or two to the individual links (best practice is to attach to two separate links on one chain, ie one higher up and one lower down). Everything was pretty beat out from the Ice Festival, unfortunately, “Hooks-n-Ladders Heroes”.

It was challenging again to keep the fingers and toes warm in this weather, but I was glad to have my big plastic double boots (Scarpa Invernos) on right now.

They aren’t exactly the best ice climbing boots, since they are so bulky and heavy, but they work… And they are certainly warm. The Outdoor Research Alpine Alibi II gloves have also been a great purchase, pretty darn warm. Love the two handwarmer pockets built in, which definitely came in handy this week.

The next couple days I climbed with Thomas, who I met during the Ice Festival. Thomas is an aspiring photographer who was lugging around a big ol’ DSLR camera, and he got some pretty sweet shots over those couple days–you can check out his full gallery here on Flickr.

The cold was pretty intense during this period, with temps down to -10 F one morning. Thomas and I waited out the cold one morning at the Backstreet Bistro on Main Street, refilling our bottomless mugs of coffee, and regularly updating the weather on my smart phone…

Waiting for it to at least reach 0 degrees before we decided to head up to the park. Yeah, kind of wimpy, sure. But when you are a “local” and living in the area, you can afford to be selective about the conditions you decide to go out in!

The pools are absolutely huge–particularly the cold water one, which also features a lap pool. It’s a great way to spend an evening after a hard (and cold) day of ice climbing, making the rotation between all the different pools and just relaxing.

It’s a popular spot in the evening (there isn’t a whole lot to do here at night), and also seems to be the place to be on the weekends if you are a local high school student. It closes at 9 pm.

Tips for the Hot Springs

TGIF has no meaning anymore… But thank god it’s a rest day does!

I’ve been running about three days on ice, and one day of rest up to this point. With a long term climbing schedule it is definitely important to build in rest days, or else you are not allowing yourself sufficient time to recover and get stronger.

I’m not sure this schedule is ideal, or whether I should possibly be resting more, but it is what it is. I have certainly pushed myself climbing everyday for a week stretch during vacation periods, which is fine for short bursts, but day in and day out is not advisable in the long term.

So Thursday was a sleep in and rest day, thankfully. One thing I’ve realized in my first few weeks of not working and just climbing is that TGIF has no meaning anymore… But thank god it’s a rest day does!

In any case, my good buddy Sameer was flying into Grand Junction this afternoon for a long weekend of ice climbing, so I had to do the two hour drive out there to pick him up.

Sameer and I haven’t shared a rope together for almost a year, but we were once regular climbing partners out in the DC area. Then he decided to move out to Bellingham, Washington for a summer of alpine mountaineering (partially my doing, telling him how great it was out there!).

That long summer turned into his permanent residence because he enjoyed it so much. Pretty awesome to have a job where you aren’t confined to a physical office location!

We stopped in Montrose to pick up some food and other provisions at Natural Grocers, a nice little organic, healthy grocery store with pretty good prices.

If you are staying in Ouray for any extended length of time, be sure to do your shopping down in Montrose, prices for food, household goods, gas, and other necessities are much cheaper than up in this little mountain town.

Friday morning Sameer cooked up some awesome breakfast burritos and we wasted no time in heading out to South Park to get on some climbs–though I did give him a basic tour and overview of the different climbing areas on the way to South Park–which is the furthest upstream climbing area in the Ouray Ice Park. We had fun hopping on a variety of climbs in the area, which was mostly quiet… The calm before the storm of a busy three-day weekend.

Sameer has always been a little more bold than me when it comes to climbing grades and getting on the sharp end.

I just have always been on the conservative side, and usually climb well under my abilities while leading. But Sameer has also always been good at pushing me to challenge myself (within reasonable steps), so at the end of the day, after he led up an easy WI2 climb in South Park, he encouraged me to just go for it and do the same.

After a little internal hesitation, I racked up, tied in, and set off climbing. It was the last climb of the day, so I also had to climb out wearing my pack–giving me a little of that alpine feel. The climb was no big deal, but I still had that exhilarated state of mind that comes with being on lead (or at least that I get!).

Making careful, deliberative foot and tool placements, trying to keep myself calm and precise, and just kept thinking about the first rule of ice climbing: “don’t fall on lead”. All was well, I placed a handful of screws, topped out, and put Sameer on belay for the climb out.

Saturday morning Sameer and I met up with Jason, an old DC climbing acquaintance who now lives in Denver. We headed out to the New Funtier area to climb for the day. Though the park was now packed with folks who came in for the three day weekend.

We got on some fun WI3s toward the downstream end, but everything was just super crowded–with ice crashing down all around and climbers on every line. We got in a few laps and then decided to move upstream in search of something else.

We found a really cool series of ice drools that come off of a rock prow and with some creative anchoring by Jason and Sameer, we were able to drop a rope on the line. It was an awesome and delicate climb, which was made even more delicate by the sun beating down on the upper portion of the climb.

It was another hot day for ice climbing. In fact, there was a guy adjacent to us that was climbing sans-shirt–slightly weird, yes.

We kept the rope set up as is, but flicked it around to the left side of the prow to play on some mixed climbs. The climbs didn’t appear to be in the Ouray Ice Park Guide book, so I have no idea of the grades, but none of us were able to put more than a few moves together. It was the end of the day, we were getting tired, and the physicality of the mixed climbing just pumped us out even further.

Each year members of my old DC climbing, the Potomac Mountain Club, make their annual week-long trek to Ouray for some ice. A few of the guys came into town a little earlier, so I invited Jason, the other Jason, and Justin, over to my place for dinner… Sameer cooked up an some delicious daal and basmati and we hung out that evening, talking about ice.

Sunday in the Scottish Gullies

Sunday morning we rendezvoused early to try and beat the crowds and set up some ropes in the Scottish Gullies. When it is busy, you’ve got to set up early in the areas closest to the parking lot, as those are the ones that always fill up first.

With all the DC climbing folks on hand, we were able to team up and drop like three different ropes. Climbing in a small group is definitely the way to go when it gets busy, since you can just rotate around and easily hop on different climbs through the day.

We set up Ach Mon, WI4 and one of the gullies that gives the Scottish Gullies area it’s name, Stubby, WI4–a short WI4 pillar at the top of a long, low-angled, ice slab, and also Oompa Loompa, an easy WI2 and a good warm up run in the morning. The Scottish Gullies is definitely one of the coolest areas in the park, as it offers something for everybody, from easy WI2 climbs to steep and long WI5s, to super hard mixed climbing…

After climbing each line a couple times, we also partnered up with some other folks and switched ropes–people are always friendly and happy to share lines in the ice park, it seems. But, disclaimer, be sure to scope out the anchors before you hop on just anything, you frequently see some pretty horrendously put together anchors when you are walking around the top of the park.

Once again we finished off the day with some mixed climbing with the short, but challenging, Le Saucisson (M5). Our new habit to jump on challenging mixed lines after a full day of ice climbing is a little strange, and probably not the best strategy from a climbing strength and technique standpoint, but it sure blasts whatever is left in your arms at the end of the day.

On Monday I had to take Sameer back to Grand Junction for his flight back to Seattle, so that also doubled as my much needed rest day. I was going on two weeks of climbing with about two or three days on and then one day of rest…

And I was certainly beginning to feel the compounding effect of so much climbing. I was only used to climbing maybe once a week during the weekday, then climbing on the weekends, and doing the rare week-long climbing binge while on vacation. My body is definitely going to need time to adjust to this new lifestyle.