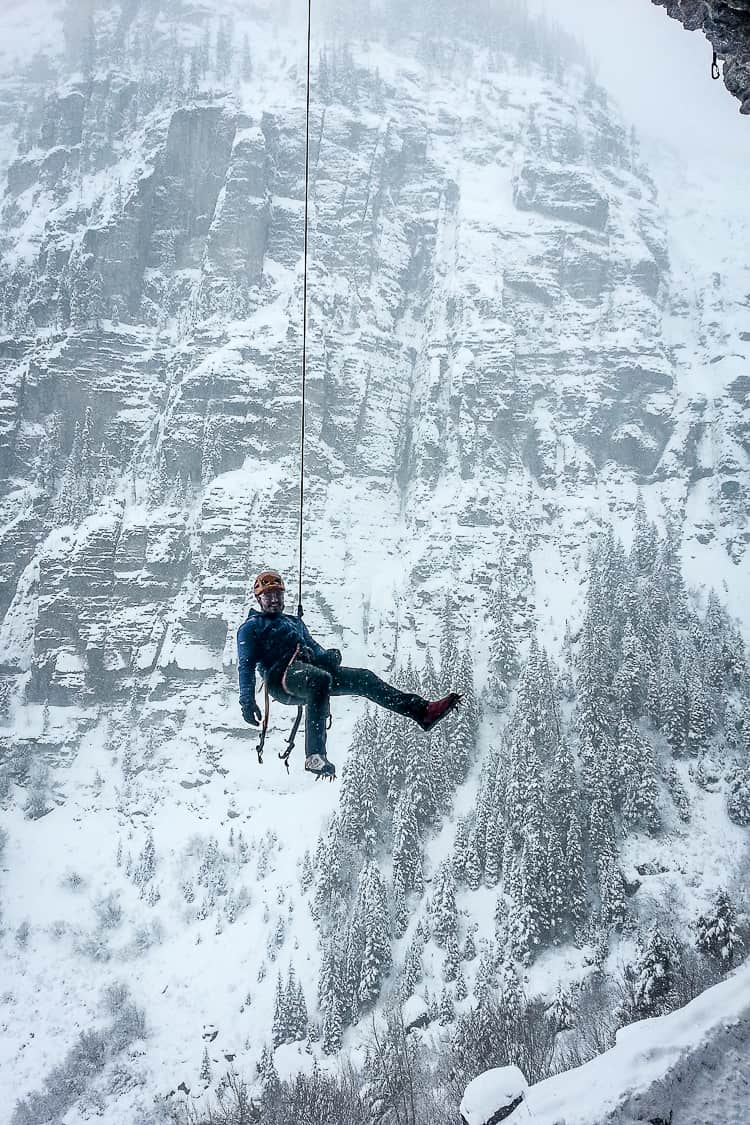 10 shares
This article may contain affiliate links. If you make a purchase through these links, I will earn a commission at no extra cost to you. Thanks!

This was one of my favorite photos from my various months of living and climbing in Ouray, Colorado, when I was lowering my buddy Mark off of a mixed climbing route in the Poser’s Lounge outside of Ouray, Colorado.

The Poser’s Lounge is a steep mixed climb–and by steep I mean it is a big roof cave that you scrape your way up with ice tools and crampons.

I’ve only done a little bit of mixed climbing, and this route was way out of my league, so I was just along for the belay. Mark successfully made it up the route with a few takes on the rope. Awesome, awesome work.

It was a super snowy day in Ouray and they were going to flood the ice park, so we decided to head up Camp Bird Road for a little bit of mixed climbing.

After a few mixed routes out in the open, we decided to seek out some shelter in the overhanging Poser’s Lounge.

Set against the beautiful, snow-covered slopes of the San Juans, I just really love this shot. And I loved my two months living in Ouray, climbing almost every day (had to take some rest days here and there, but luckily there are a lot of things to do in Ouray Colorado).

If you ever want to really get into ice climbing or just love little mountain towns–you’ve got to head to Ouray at some point.

Ouray is known as the capital of ice climbing in the United States, if not the entire world, but it isn’t limited to ice climbing — there is also plenty of so-called mixed climbing to be had both within the world famous ice park, and out in the wilds surrounding town, such as this climb up along Camp Bird Road.

Check out all my posts on Ouray here.