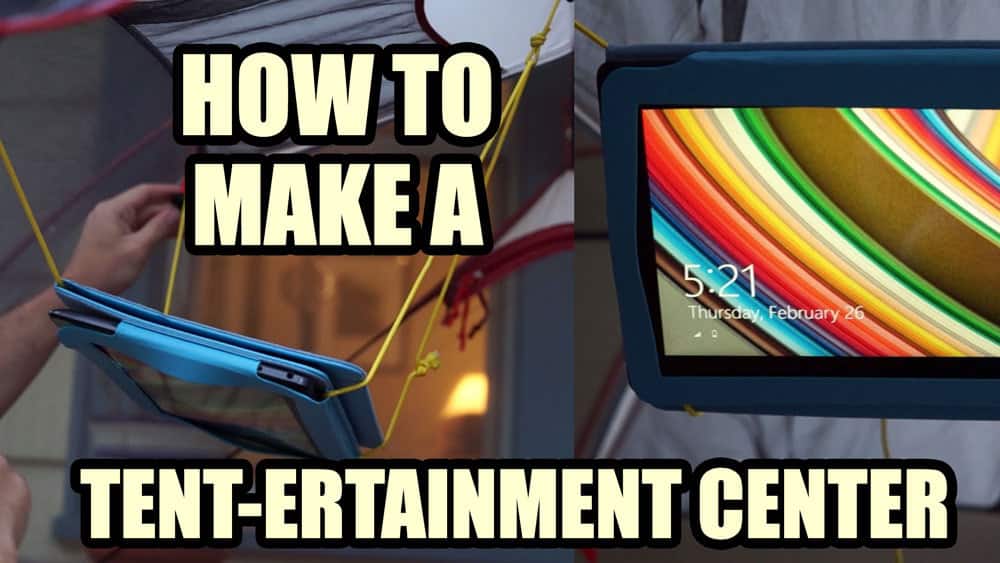 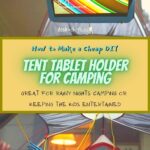 We’ve been heading out pretty regularly here in Washington State, but it’s winter here. The nights are long and cold–when you don’t have a fire, there isn’t a whole lot to do while camping once the sun falls below the horizon, or sometimes you’re stuck inside with pouring rain. Either way, there are times you just want to crawl inside your sleeping bag and watch a movie or an episode of your favorite series. This is when a DIY tent tablet holder comes in real handy!

Recently, we’ve been alternating between tent camping nights and truck camping nights depending on the location. But when you’re in the tent, it’s pretty awesome to just lay back and have the movie floating above you in the tent.

While I generally prefer to hang out and watch the stars while camping, when you camp as much as I do, sometimes it is nice to just watch a movie with your tent iPad holder as a little makeshift tent entertainment system. Or maybe you’ve got little kids and you’d like to have movies for them to watch while camping. Either way, this is a great, cheap, functional DIY tent tablet holder.

I noticed that REI has a Big Agnes entertainment center loft that strings up to the gear loft points available in most modern tents. Unfortunately, the thing retails for $50…

So, I decided to set out to make my own cheap version of the gear loft entertainment center that we could use for those long nights in the tent. 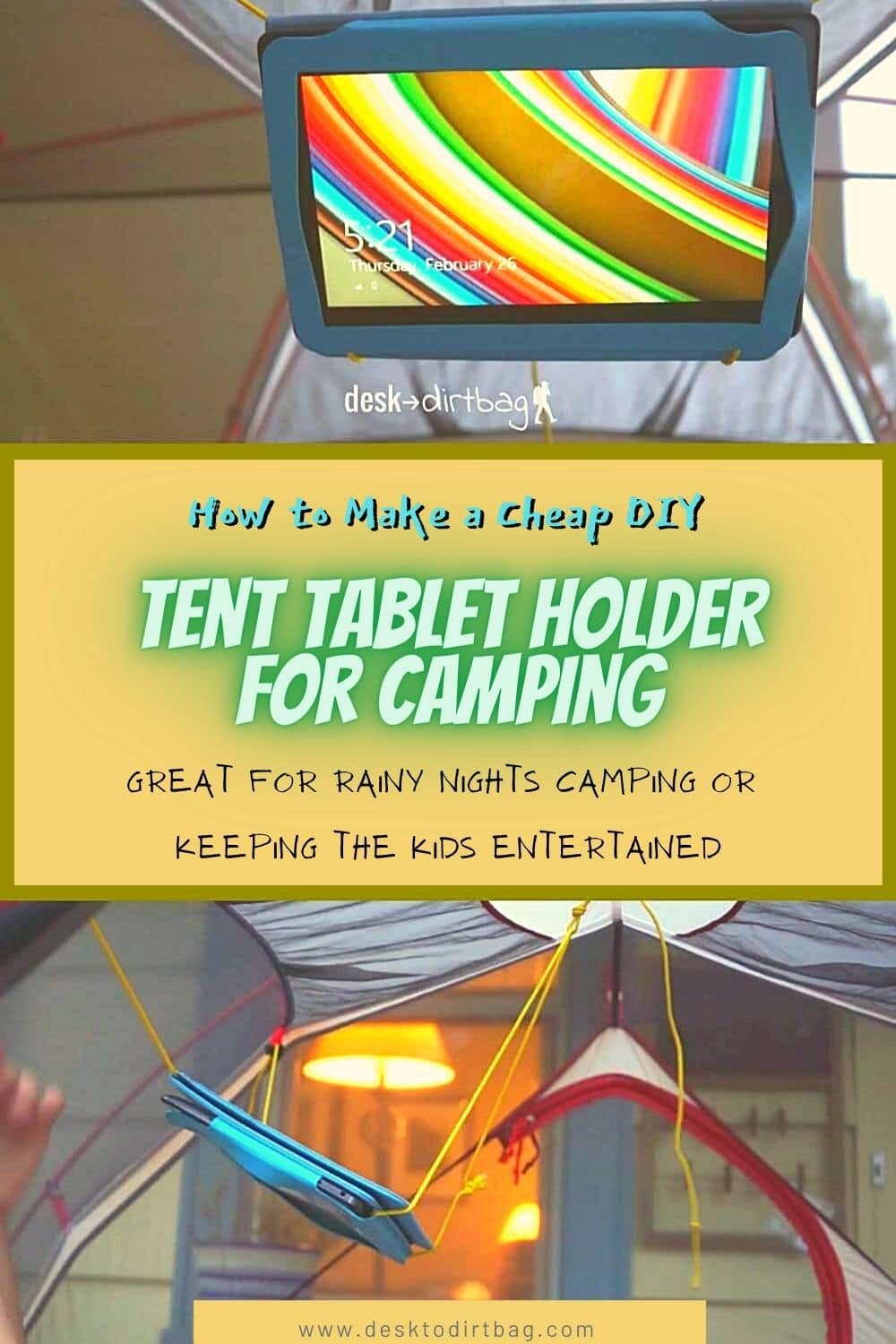 Tent Tablet Holder Video How To

Check out the short video below that I put together about the DIY tent tablet holder, what it is, and how you can make i. Keep reading for further details and photos. 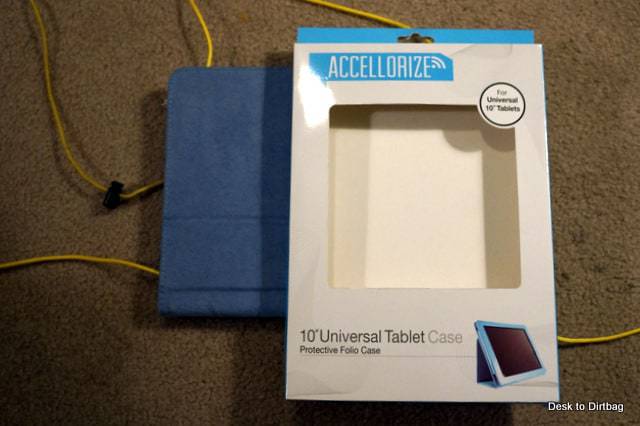 I used a cheap folding tablet case from Walmart that I wouldn’t mind modifying. First thing was to stick velcro on the front and back in order to keep the tablet case closed while strung above. 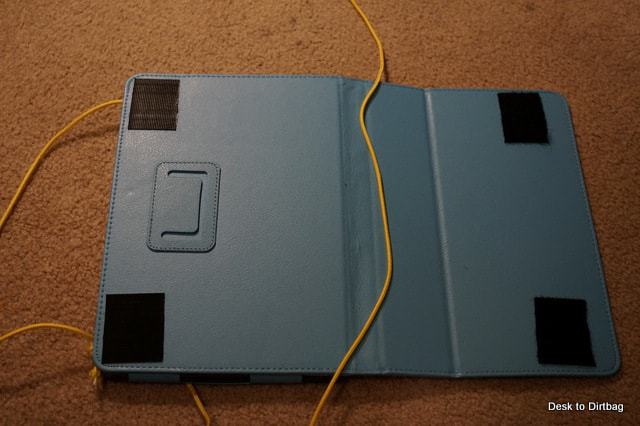 Back of the tablet case with sticky velcro and the cord the lays in the fold.

I ran a 3′ section of cord where the tablet case folds over and put the toggle cord locks on each end. This piece is not attached whatsoever–just held in place by the crease in the tablet while velcroed shut. 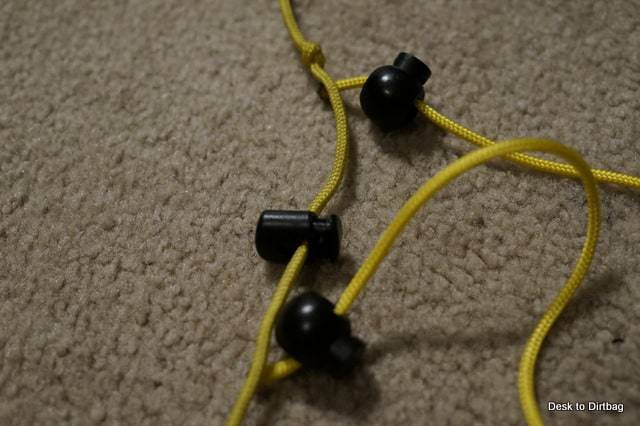 Toggle cord locks or whatever they call them…

I ran another section of cord between the open holes at the bottom of the case and (when it proved to be too short) tied it into a closed knot and then tied a simple foot long extension to the loop. On the end of that single strand, I added my third toggle cord lock. 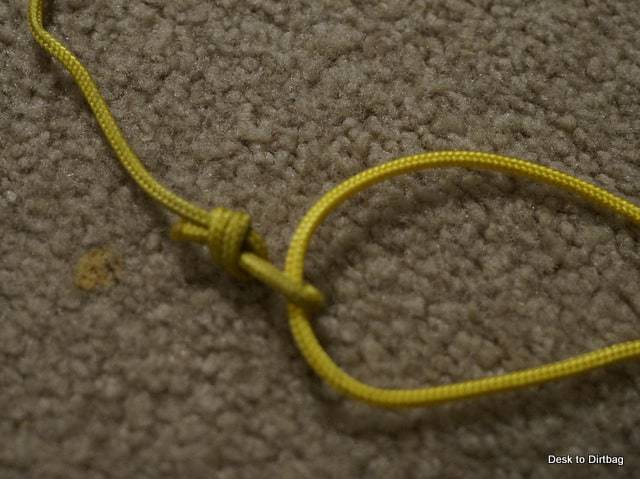 Close up of the attachment I tied on the loop of cord to adjust the bottom.

On my REI Half Dome 2 person tent, this setup works perfectly. I have five loops where I can hang things from the top of my tent, one in the center, and four along each pole. 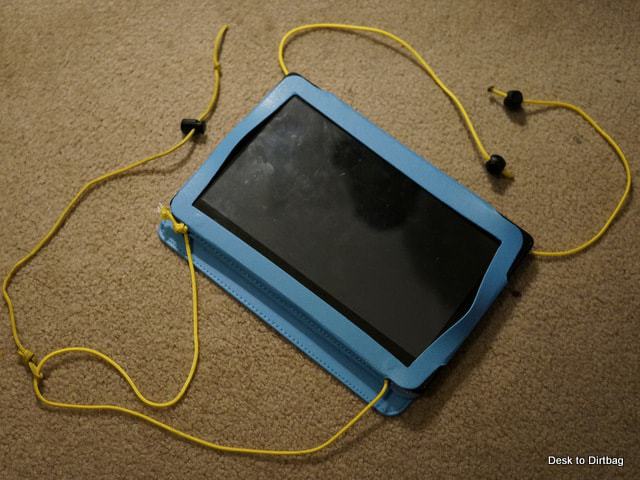 I just slip the top two toggle locks through the loop at the corner, and the back toggle lock through the central loop. The weight of the tablet keeps the gear loops shut and prevents the toggle locks from slipping out.

You can adjust the height and the pitch of the tablet quickly and easily by adjusting the toggle locks.

We love our DIY tent tablet holder and tent entertainment center. Download a few movies offline, give your tablet a good charge, and you’ve easily got a few nights worth of entertainment for those long nights in the tent whether it’s due to cold temps or rainy weather. We even used a similar setup as we did the multi-night Santa Cruz Trek in Peru.

What do you think about the DIY iPad holder? Give it a try and sound off in the comments below.