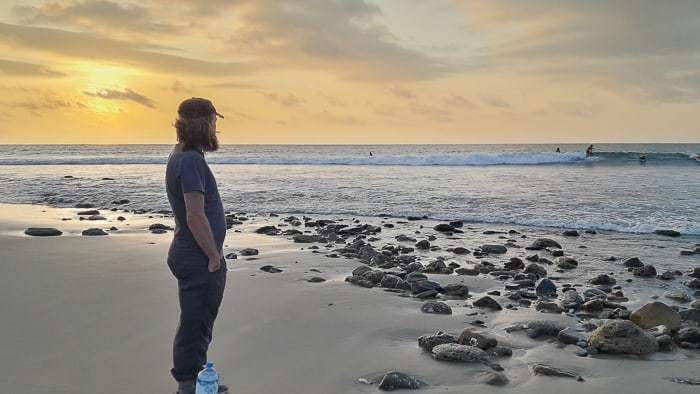 31 shares
This article may contain affiliate links. If you make a purchase through these links, I will earn a commission at no extra cost to you. Thanks!

Time for another monthly recap and income report, where I share what’s new in the world of Desk to Dirtbag and offer a bit of transparency behind the blogging.

Old Friends – It was great meeting up with my good buddy Jeff when he flew down to South America to join Andrea and me for two weeks of adventures. We hadn’t seen one another since climbing Mount Adams last year.

We managed to see some pretty cool stuff, like hiking around Quilotoa and visiting Cotopaxi and Chimborazo — two massive volcanoes in Central Ecuador. 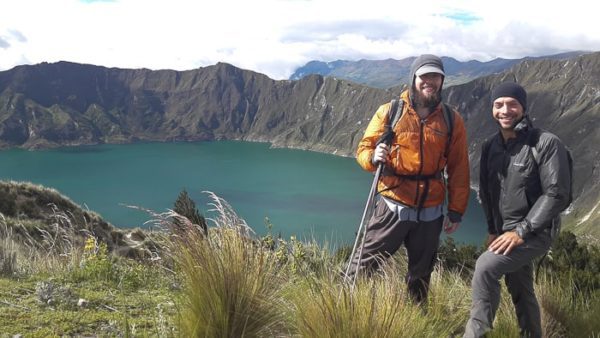 We hoped to climb some of the big volcanoes, but things didn’t quite go as planned…

First Time Surfing – When things didn’t go as planned, we abruptly shifted gears and headed to Ecuador’s coast. Jeff has been surfing along Washington’s coast for a while now, and somehow convinced me go surfing. 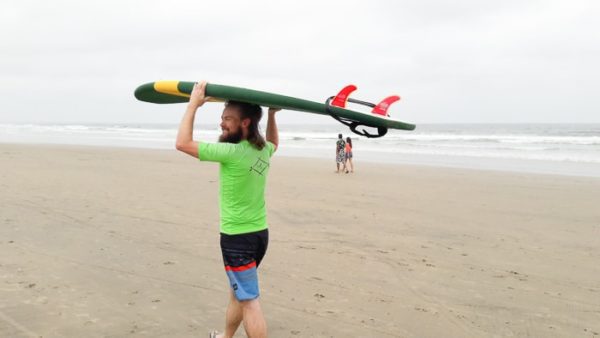 Now, to be clear, I’m not a “water person”. I’m somewhat afraid and timid of the water, and not a strong swimmer, so for me to go surfing is pretty out of character.

But I saw that the water wasn’t deep where we would be surfing and I wouldn’t feel totally vulnerable.

We surfed in Montanitas and later in Canoa. And I found the experience to be… Fun! It wasn’t as scary as I thought it would be.

But I did get my butt kicked by the big thrashing waves in Canoa. By the end I was sore and broken (my ribs hurt like crazy — so much so I thought I might have broken one), and had to skip out on the fourth day of surfing.

While surfing is still intimidating, it’s something I could conceivably see myself doing again in the future.

Crazy Fireworks in Cuenca – Andrea and I found ourselves in Cuenca, without planning, during their big Corpus Christi festival.

This was not your standard fireworks show though… This was an entirely other beast. Men with bull statues on their head — loaded up with fireworks with long fuses — would run through the crowds as the fireworks would randomly shoot out onto the bystanders. 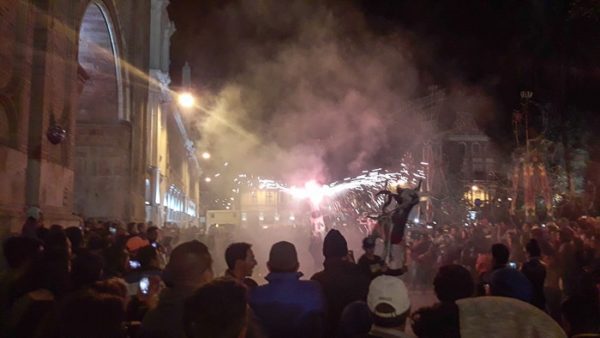 People would huddle behind one another and shriek as they exploded everywhere. It was like running with the bulls but with fireworks. It was a strange and surreal night.

Entering Peru – By the end of the month Andrea and I crossed into Peru, which is my 19th country, I think. Peru has long been on my list of places to visit. Though the north of Peru was, on the whole, disappointing. Dirty, garbage strewn, and relatively uninteresting. 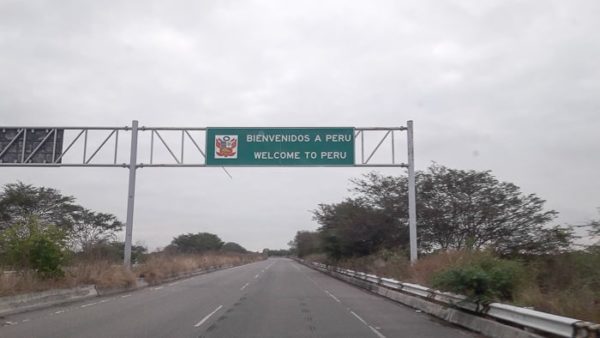 We stayed a few days in Mancora, but it was in the midst of cricket infestation. My ribs still hurt so I didn’t get back surfing, although I wish I would have.

The highlight of our visit to Northern Peru during June was certainly swimming with the sea turtles near El Nudo. 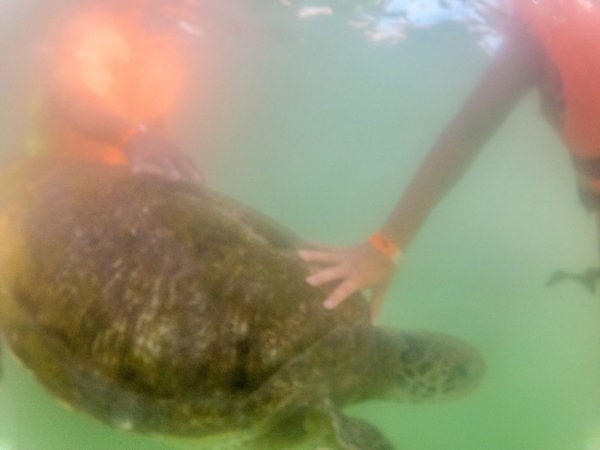 These are wild turtles that come around because the locals feed them, but you can jump into the cold ocean as these massive things bump into you. 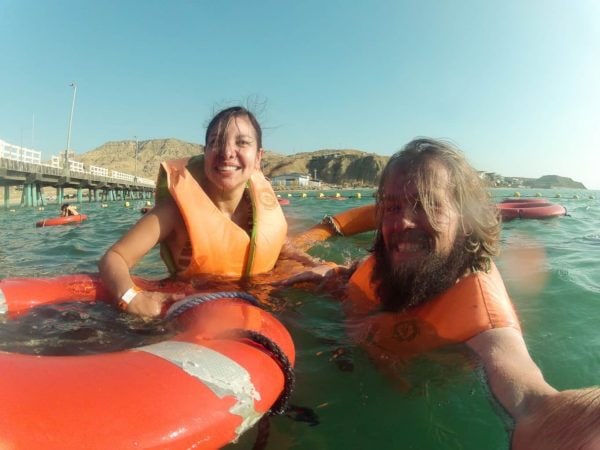 It was a strange, awesome, and once in a lifetime experience that we both loved.

Sickness and No Mountain Climbing – Jeff came down because we were planning to climb some big mountains (bigger than either of us had ever done). We wanted to climb Cayambe and then Chimborazo (20,548 feet).

But our plans were quickly derailed. Jeff got violently ill upon arrival in Ecuador. Then I got sick and was vomiting (although not as bad as he had it).

That prevented us from doing the acclimatization hikes we planned to do. We got in a few cool little trips between bouts of sickness and then tried to salvage things with a night spent camping high at the Chimborazo refuge, but we both woke up with headaches. 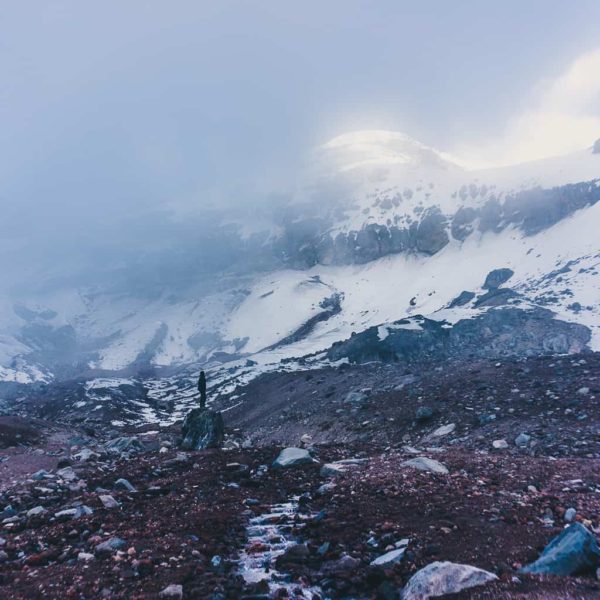 We suffered for a week pretty much, and weren’t ready for an attempt on the high mountains. So that’s when we decided to scrap the plans and head to the coast for surfing. It worked out, but I’m still disappointed that our climbing plans didn’t work out.

I’ve long dreamed of climbing the big volcanoes in Ecuador… 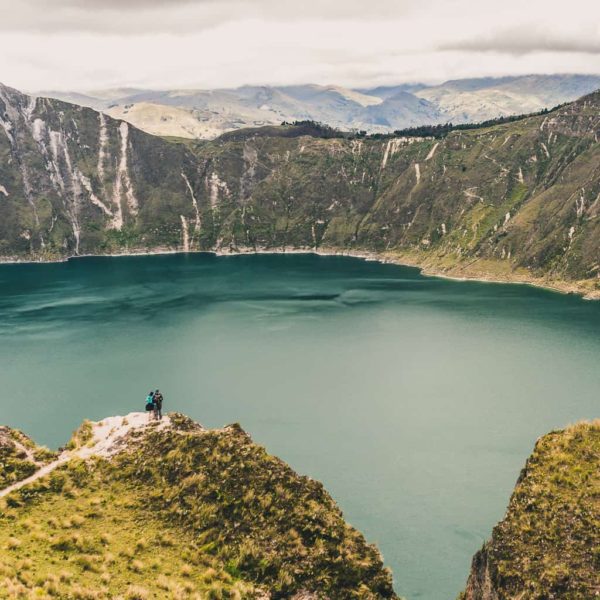 This shot of Andrea and me standing on the edge, overlooking Quilotoa in Ecuador was the month’s most popular post.

Quilotoa is an amazing hike that takes you along the knife edge ridge that wraps around this massive lake. It’s like Crater Lake, but sits at 12-13,000 feet altitude.

My few days of surfing along the coast of Ecuador instilled in me a new interest… I wanted to learn more about the world of surfing.

I’ve been familiar with the book for a few years, but finally jumping on a surf board and seeing just how difficult and exhilarating it was, inspired me to pick up this famous surf memoir.

I’m obviously not a surfer (a few days on the board doesn’t qualify) but I still found the book to be a compelling and interesting read for surfers or non-surfers alike.

It tells the story of a life-long obsession with surfing, how it impacted his relationships, his work, the very direction of his life as he pursued big waves.

The book is also a travel memoir, detailing his exploits chasing waves across lesser traveled parts of the globe.

I recently finished off the third and final season of Bloodline, Netflix’s series about the dysfunctional Rayburn family and their ultimate unraveling as internal family conflict leads to bloodshed and then cover ups and lies upon lies.

The show can be somewhat slow moving, but the compelling story, solid acting, and setting in the Florida Keys make it come alive.

The first season was the best though, detailing the conflict between the black sheep brother and the rest of the family.

Season two was compelling as it showed the fall out and internal struggles with guilt and blame.

But season three just kind of fell flat for me. It was mostly treading water.

If you haven’t seen Bloodline, I’d still recommend checking out the first season — it is good entertainment, and certainly better than many series on offer on Netflix.

June was a slower month than May, with 12% less overall earnings unfortunately.

After two months of publishing new blog posts 3x per week, my blogging dropped off a cliff with exactly ZERO new posts in June. It was a busy travel month and things just got derailed, but that obviously had an impact on my bottom line.

Worst part is I had a few blog posts ready to go, but I just didn’t take the time to put them together and schedule them to go live.

If you have any upcoming purchases, please shop through the D2D store at no extra cost to you.

Traveling somewhere? Book your hotel through Booking.com or grab your free travel credit for Airbnb.

That’s all I got for you this month. Are you following along on Instagram or Facebook? Be sure to do so, if you want to get the latest.

As always questions, comments, and feedback are extremely welcome.