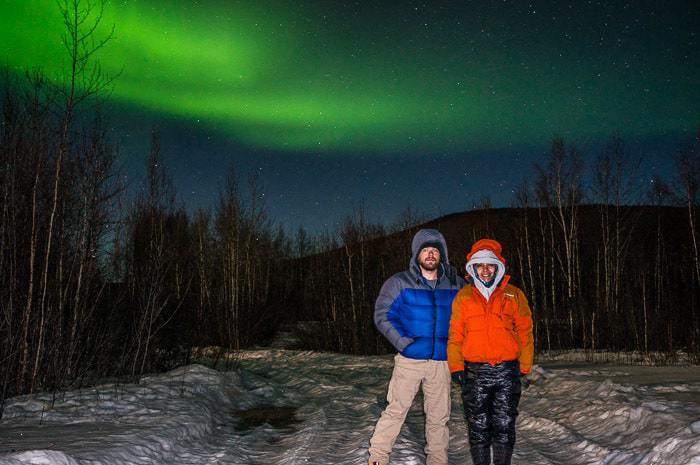 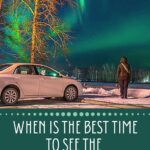 Virtually every traveler I’ve ever spoken to has mentioned the wish of seeing the Northern Lights one day. After having finally witnessed them with my own eyes, I can tell you that is honestly an experience like no other. But if you’re planning a trip, it is important that you plan it around the best time to see the Northern Lights in order to avoid disappointment and to ensure the best odds of actually seeing it.

First of all, the Northern Lights is a naturally occurring phenomenon that is notoriously difficult to predict except in the hours leading up to it. Much of it is dependent on solar activity, and although scientists can accurately predict the number of sunspots, they cannot predict when nor how frequently they will occur.

The best they can do right now is predict a rough guide based on certain timescales with the sun, which sees the cyclical activity of increasing and decreasing solar activity, which in turn causes the Northern Lights we see here on Earth.

These cycles of waxing and waning in activity occur in roughly ten-year timelines, with the last solar maximum occurring in 2014 and the next in 2025 — meaning that we are in a period of diminishing solar activity heading toward the solar minimum.

But even if you’re headed to see the Northern Lights during a solar minimum, that doesn’t mean you are out of luck or that there won’t be any activity, just that it might not be as intense as other years.

Generally speaking, the Northern Lights are still very active for two or three years after a solar maximum, and some research even suggests that there are more significant solar events in the period of decline following a solar maximum.

The Best Time of Year

The Northern Lights occur year-round, but due to the increased daylight and long days surrounding summer in the Arctic, it is not visible to the naked eye — only scientific equipment or even a camera can capture activity.

This means that you cannot usually see the Northern Lights from around early April until late August, which in turn means that late September to March is the time of year you will be aiming for.

There is also some speculation that solar activity increases around the spring and autumn equinoxes (around March 20 and September 20).

December sees the longest and coldest nights, which means you can see the Northern Lights at an earlier hour than at other times of the year.

But it is important to consider general weather patterns as well — the depths of winter often bring an increase in cloud cover (all that snowfall, ya know?) which will obstruct any potential show.

March in many cases is the best time to see the Northern Lights in that it usually offers clearing weather as the seasons change, longer days for non-Aurora activities, and warmer temps than you would find in the dead of winter.

Fairbanks, Alaska is one of the best places in the world to see the Northern Lights and is where we went when we wanted an almost guaranteed chance to see them. I will be using Fairbanks as the example for planning a trip but this advice applies to any destination in the north, whether you’re going to Northern Norway, Iceland, Finland, Canada, or so forth.

The most important thing is to find a destination close to the Arctic Circle and follow my advice if you want to see the Aurora Borealis. So if we look at the historical weather patterns via a site like WeatherSpark, we can look at cloud cover, precipitation, temperatures, and hours of daylight, among many other things.

In the case of Fairbanks, we will see that March is historically the driest month of the year and also features the highest probability of clear skies (yes, even more than Summer).

March also offers around 8 hours of the night (aka truly dark skies) which gradually diminishes and changes into pure twilight by mid-May (which is what makes it difficult if not impossible to see the Aurora, aka Northern Lights).

If you are planning a trip to another destination, you should be sure to analyze the historical weather patterns and be particularly cautious around coastal or maritime climates that often feature a lot of cloud cover in the winter.

For instance, it is usually possible each winter to (theoretically) catch a glimpse of the Northern Lights from Seattle in Washington State, but the nights are almost always cloudy at that time of year.

The most important decision when trying to plan a trip to see the Northern Lights is avoiding light. Now, this obviously means getting outside of the city to avoid any man-made light so you can find the darkest skies.

But this also means avoiding moonlight, something which many people fail to consider.

If you happen to book a trip during a full moon, you will have dramatically reduced visibility.

The best thing to do is to look at a lunar calendar and find the New Moon and then book your trip on the days around that date.

In the 2022-2023 winter, the new moons occur in Alaska (they could vary by a day in other parts of the world) on the following dates:

This means if I were planning a week-long trip, I would book my trip for three days before and three days after the New Moon — keep the new moon in the middle of your trip in order to maximize dark skies — or bearing in mind the other points mentioned above about weather patterns, I would lean toward March in this case if you’re looking for the best time to see the Northern Lights.

Be sure to keep in mind daylight savings time though. This occurs on March 12th in 2023, so the clock will spring forward an hour, shifting things back a bit.

At this time of year, in mid-March, sunrise is at 7:47 am and sunset at 8:10 pm — but night, which is that true darkness that is not civil, nautical, or astronomical twilight, occurs about three hours later from about 11:11 pm until 4:48 am.

It’s during the night (and not twilight) period where you will have the darkest sky and best potential show. In our case, while visiting Fairbanks we often only left the hotel to try and see the lights at 10 pm or so.

We went in March, and at times we stayed out until 3 or 4 in the morning if the lights were particularly awesome, and then we would return to the hotel to sleep until noon.

Yes, we turned into vampires, but there was still plenty of daylight to do things since the sun doesn’t set until almost 8 pm at that time of year after the clocks change.

And check out my guide on things to see and do in Fairbanks during the winter — including Alaska dog sledding, one of the coolest activities, especially at night with the Northern Lights above! If you don’t plan to rent a car, you can also take some great Alaska Northern Lights tours, as well.

Read Next: Things to Do in Fairbanks Alaska in Winter

Tips to Book Your Trip Now & Save Money

Book Your Flight
Book a cheap flight with Momondo, they’re my favorite search engine. Or better yet, start travel hacking so you can fly for free. Another great search engine is Skyscanner.

Book Your Accommodation
Book cheap accommodation in advance. For hostels I recommend HostelWorld, for hotels I use Booking.com or Hotels.com, and for apartments or longer stays, I use Airbnb. I like to check reviews on TripAdvisor prior to reserving.

Don’t Forget Travel Insurance
This is easy to overlook but SO important. It will help protect yourself from illness, injury, and theft while traveling. VERY important. And be sure to read my article about international travel insurance for more details

Looking for the Best Companies to Save Money With?
Check out my budget travel resources page for the best companies to use when traveling. I list all the ones I use and recommend to save money when I’m on the road.