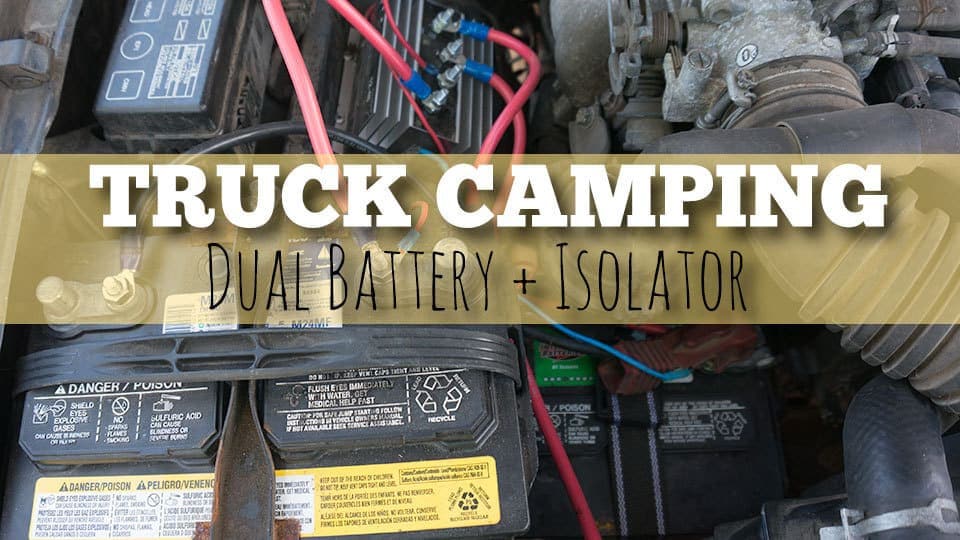 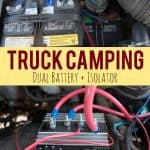 One of my most frequently asked questions about my truck camping setup was always in regards to a dual battery setup and adding an isolator.

Up until now, my answer had always been, “I don’t know, but that’s something I really wanted to do before leaving.”

A dual battery setup with an isolator, for those who don’t know, is pretty much what it sounds like: connecting two car batteries to your vehicle’s alternator while adding in an isolator of some sort to keep the batteries separate (isolated!). 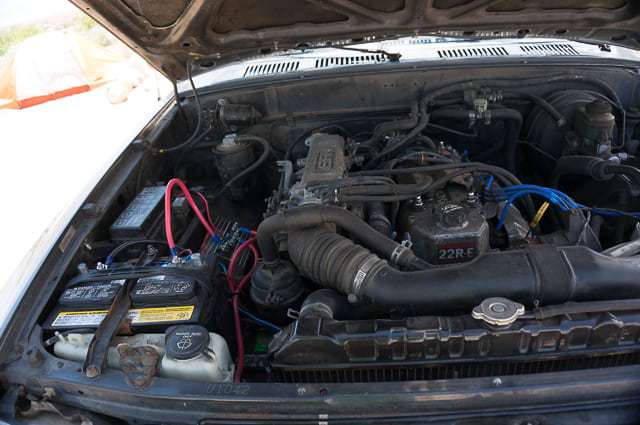 In practice this means that while you are driving around all day you are charging both batteries like normal, but when the vehicle is off the batteries are not connected and cannot see one another.

Thus allowing you to connect your accessories and electronics up to this secondary battery to use while camping without ever worrying about killing your main battery and being unable to start your vehicle the following morning.

Previously when I spent the better part of a year camping out of my truck, I was running the normal single battery setup.

This meant that when I was charging my electronics out of the canopy (I had a pod of three cigarette lighter adapters hooked up to my main battery in the back where I would run my 400w inverter) that I would, perhaps over cautiously, idle my truck about every hour in order to ensure that I would not kill my battery. 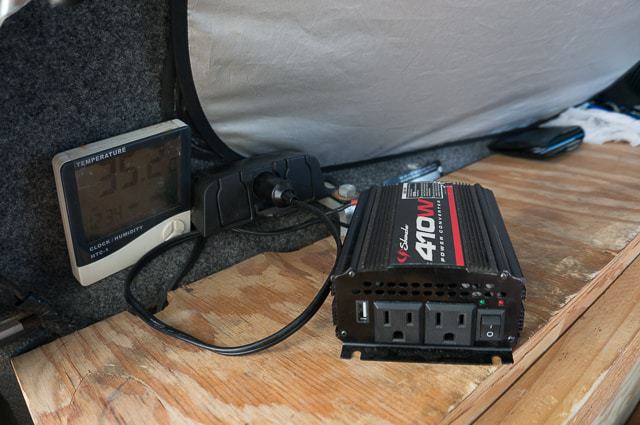 Nothing worse than getting stuck out in the middle of Grand-Staircase Escalante’s Hole in the Rock road, or some other remote area and being unable to start your vehicle and being stuck without cell service.

Alternatives to a Dual Battery Setup

Of course, you can buy portable emergency jumper batteries, they also sell batteries with a special jumper built right in to it. But you don’t ever really want to kill your starter battery–it’s not good for them in the long run and they aren’t built to be drained down to zero and then charged back up.

I would read and read about dual battery and isolator setups on the Internet from various websites and on Expedition Portal. But I just couldn’t really get my head around it.

Getting a Dual Battery Installed

So I just bit the bullet this year before setting out on the road again and made some calls to area businesses and had them set me all up.

In all it only cost me about $370 for them to do it, about $120 of which was the cost of labor, the rest was the parts $120 for a deep cycle marine battery (which is what you definitely want as they are designed to be discharged down to zero).

I got an ACDelco M24MF marine battery, $55 for a NOCO 90A Isolator–which you can grab for less than $30 on Amazon, and the rest for miscellaneous parts like wires to hook up the battery, new battery tray, etc. 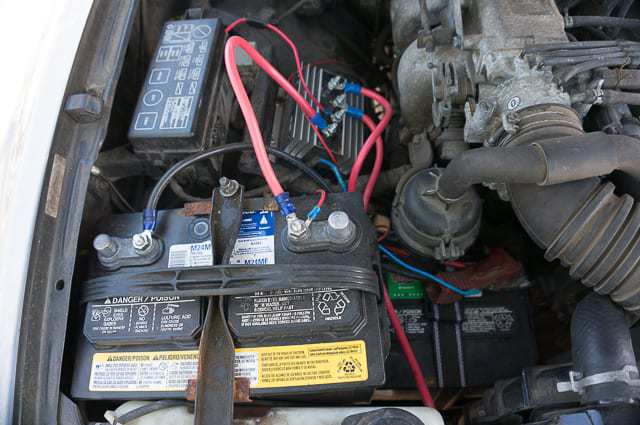 Both batteries and the isolator. 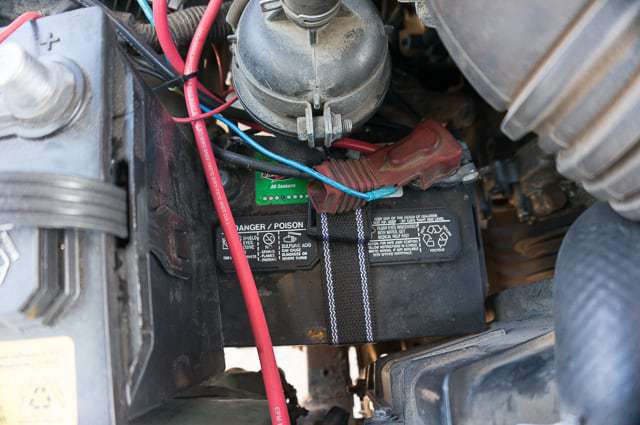 The main starter battery now moved into the space below. 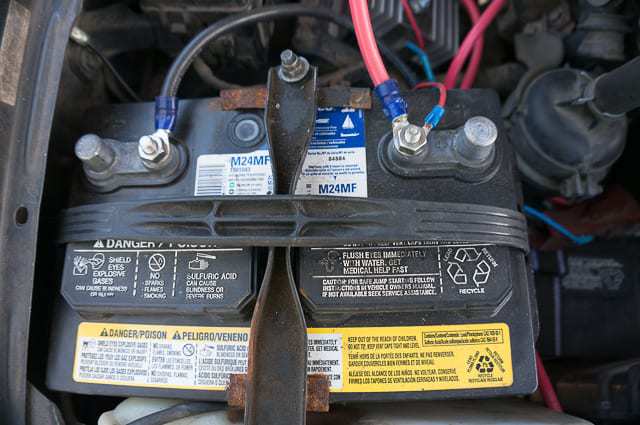 The new accessory battery which runs everything in the canopy. The thin red wire runs to the back of the canopy.

Of course you can order super duper fancy dual battery isolators with a brain and panel readout which shows how much power remains in each battery, how much they’re charging and how much they are being drawn down.

But those kits run upward of hundreds of dollars themselves, and that’s without the second battery or any installation. 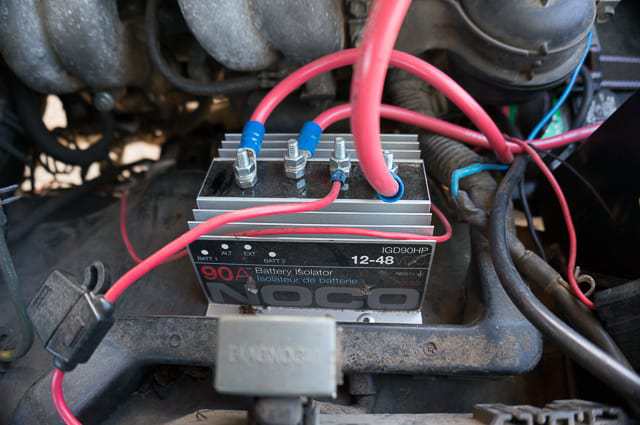 Really you just need a simple kit. Less that can go wrong with it on the road as well. Which electronics are absolutely notorious for doing.

Reading online it never sounded too complicated–but with the grounding of the batteries and things of that nature, it was just over my head. So, if you’re able, definitely follow this Expedition Portal thread about a $50 isolated dual battery.

Or, if you’re like me, and that’s still too complex, do it the true dummy’s way and have a local handy man install it for you.

Most normal auto repair shops will not want to do a dual battery setup.

So your best bet is to call around to car stereo specialists (they often install a second battery for their clients to run their high powered stereos) or to call an RV repair place or shop (who are more specialized in the needs and demands of using a battery for a home on wheels).

I called both. The audio stereo specialists quoted me a price of upward of $500. And the RV repair folks quoted me about $350.

I ended up going with Affordable RV Repair in Bremerton, WA. They had the best rate and the came recommended by my neighborhood mechanic.

The other complication with doing a dual battery setup in my truck, a 1991 Toyota Pickup (Hilux) which predates the Tacoma models, is that it features a small engine compartment.

The 22RE models are renowned the world over for their reliability and toughness (the AK-47 of the automobile world–indeed insurgent groups in the harshest of conditions often use the Hilux), it is quite a tight little engine and there isn’t a lot of room under the hood.

Just when I sort of though I had a grasp on the logistics of mounting a second battery, I struggled with the question of where I could actually PUT the second battery.

All the more reason to take it into the professionals.

Chatting with the pros, we decided that we could move the starter battery down a little bit into the empty space near the radiator (just down and to the looker’s right of the original location), and thus mount the larger deep cycle marine battery where the starter battery used to go.

They wired each battery up to the alternator and then mounted the isolator to the frame nearby.

You Need a Dual Battery Setup

Besides adding a canopy and outfitting the back for gear storage and sleeping, I think adding the second battery was the best thing I’ve done to make life on the road more comfortable.

I have yet to kill my second battery and have been able to keep all my electronics charged without fail while camping up to three nights without ever even starting my truck.

Again, I don’t know how much things are drawing down, or how far I could have taken my single starter battery previously, I just now now that both and Andrea and I are able to easily keep our two cell phones, two cameras, two laptops, and other miscellaneous electronic devices charged and ready to go.

We’ve even been running a cheap fan off the secondary battery throughout the nights in the heat of the desert while camping, which makes it so much more comfortable to sleep. 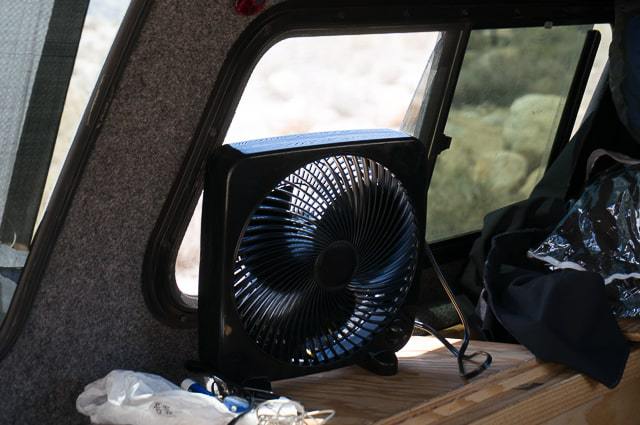 Of course never forget your ABC’s — Always Be Charging — while you are on driving throughout the day, for us that usually means cell phones connected up front, perhaps a camera, and then charging other items in the back of the canopy, most often the laptops.

If you’re really wanting to do it right, you should run a thick gauge wire from your secondary battery back to the canopy hook up, that way you’ll get the strongest connection with the power.

Since I originally posted this, I’ve run thick, heavy wires from the second battery straight back to my inverter. I can now run pretty much whatever I want back there, including using my laptop while it is connected. It was a great addition!

You can get super complex, some campers even run mini fridges out of the back of their canopies while on the road. It seems cool, but I haven’t gotten to that point, nor am I willing to shell out the $600+ for one. You might be better off just going for one of those Yeti coolers.

All-in-all, I am SO happy to finally have an isolated dual battery setup, and anyone that is seriously looking at spending a longer stretch of time on the road and truck camping should absolutely have one in their setup.

So even if you’re a mechanical and electrically dummy like me, you shouldn’t be intimidated, just call around to your neighborhood RV and car audio specialists and explain what you are looking for, a dual battery setup with an isolator in order to charge and run accessories.

It should run you around $400 and is absolutely worth every penny, as far as I am concerned.

Join the private Facebook group Pickup Truck Camping to ask questions and share your insights. We are now a few thousand active members!